Bubbles are big – the market for sparkling wine has been steadily increasing for decades, with consumption reaching close to 20 million cases in 2014, according to The Wine Institute. And more than half of those bottles — popped open to celebrate everything from major milestones to making it through another Monday — were made in the USA.

It’s a sparkling success story that stretches back centuries, peopled by dreamers and innovators and soaring from disastrous days to flashes of good fortune.

And it all began in Ohio. Sure, you might think California when you think domestic fizz, but the first American sparkling wines came from the Buckeye, not the Golden, State.

As the 19th century dawned, Cincinnati lawyer and temperance movement supporter Nicholas Longworth, was looking for a lighter alternative to whiskey, the popular alternative to water which back then could very well be hazardous to one’s health in its natural state. He began making wines from the Catawba grape, a hybrid grape created by crossing American Labrusca grapes with the European Vitis vinifera vines traditionally used to make Old World wines.

The first wines tasted musky, which is common with wines made from American grapes so Longworth tried removing the skins from the juice before fermentation and created a sweetish pink wine that was an improvement.

In 1842, an accidental sparkling wine was created when some of the wines spontaneously fermented in the bottle and the results were so encouraging that Longworth hired French winemakers to teach him how to create bubbles on purpose.

By 1859, Ohio was the biggest wine producer in the states and Longworth was producing more than 100,000 bottles a year. But in 1860, the industry collapsed when disease struck, destroying thousands of vines. Sparkling Catawba faded, but Longworth is remembered as an important figure in American wine and sparkling wine in particular.

It’s no surprise Longworth turned to France for instruction on making sparkling wine; they are past masters at the art. Click Here to Shop For Sparkling Wine on Amazon

There are two major ways wine gets its fizz and the most expensive and labor-intensive way, known as methode traditionelle, or traditional method, was perfected in the Champagne region of France.

In this method, the wine is made and bottled and then a small amount of sugar and yeast is added and the bottle is secured with a crown cap, similar to those used on beer and sodas. The yeasts consume the sugars, producing alcohol and carbon dioxide, which has nowhere to escape and turns into bubbles.

The second, less-expensive method is known as charmat, or tank, method. The same secondary fermentation takes place, but it’s in a pressurized tank, not in the bottle, which produces larger bubbles and is generally considered to be a less high-quality wine although it can make for very pleasant drinking, think Prosecco.

Sparkling wine can be made from any grape but the great sparkling wines have traditionally been made with the grapes of Champagne: Chardonnay, Pinot Noir and Pinot Meunier.

And while all Champagne is sparkling wine, not all sparkling wines are Champagne, that’s reserved for wines actually made in the French region and producers there have waged a vigorous campaign to stop producers in other places of the world from calling their sparklers Champagne.

In the United States, a trade agreement bans putting Champagne on wine labels, but a loophole grandfathers in brands that were doing so before 2006. They can use “champagne” provided they add the region of origin, e.g., “California champagne.”

Rise of the Modern U.S. Sparklers

One of the U.S. producers that does use the “California champagne,” labeling – and strongly maintains it has every right to do so by tradition – is Korbel, which was founded in Sonoma County in Northern California at the turn of the 20th century by the three Korbel brothers, immigrants from Bohemia, now the Czech Republic. Prohibition closed down production but after repeal in 1933, the next generation resumed bottling. The winery was later sold to the Heck family, current owners, and sells more than 1.3 million cases annually.

A new chapter in California sparkling wine opened in 1965 when Jack and Jamie Davies bought the historic, and rundown, Schramsberg Winery in Calistoga, at the northern end of the Napa Valley. Their plan was to renovate the property and make sparkling wine, but not just any sparkling wine. They wanted something that could compete with the world’s best. In 1972, their efforts were rewarded when the Schramsberg 1969 Blanc de Blancs was served at the “Toast to Peace” in Beijing at the meeting of Richard Nixon and Chinese Premier Zhou Enlai, a huge step for domestic bubblies.

American sparkling wine had arrived, and no one knew that better than the great Champagne houses, which began investing in California. Franco-American ventures included Domaine Chandon (Moet et Chandon), Roederer Estate (Louis Roederer) and Domaine Carneros (Taittinger). Other producers of note include Iron Horse Vineyards, J Vineyards, and Gloria Ferrer, which was founded by the Ferrer family of Freixenet S.A., the Spanish cava producer famous for its black bottle. (Cava refers to Spanish sparkling wines produced using the traditional method.)

California makes a lot of great sparkling wines, but it doesn’t have a lock on the market.

In the Finger Lakes region of New York State, sparkling Rieslings have won acclaim including the Dr. Frank Celebre. The rising wine region of Washington state also has a number of sparkling wine producers including the well-known Chateau Ste. Michelle. And while you might not think of New Mexico when you think of wine, Gruet Winery, founded in the 1980s by Frenchman Gilbert Gruet, has made a name for itself both in terms of quality and price, their vintage Grand Rose, which can be found for around $50, has been ranked as an equal with French bottles costing double the price.

Michelle Locke is a journalist based in the San Francisco area who has been writing about California wine since 2002. She covers wine, food, spirits and other lifestyle topics for national newspapers and other publications. 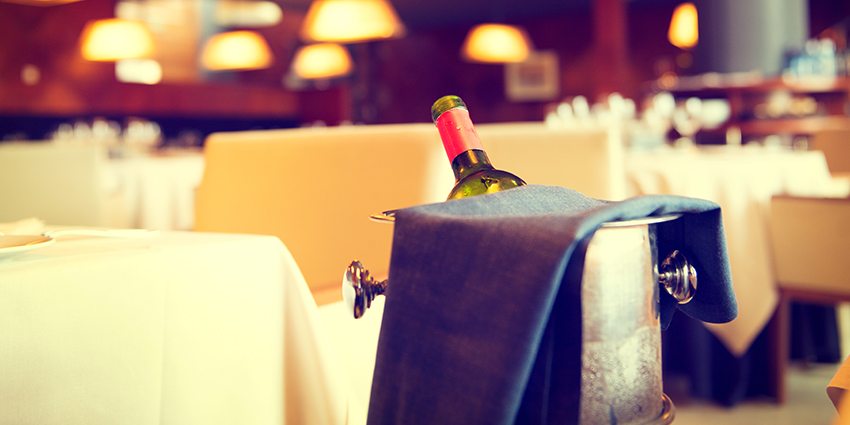 6 Tips for Choosing the Right Wine at a Restaurant 4 Types of Preservatives in Wine By Michelle Locke
2 Comments
#california wine#champagne#history#sparkling wine
Wine Info
Certain content that appears on this site comes from Amazon Services LLC. This content is provided 'as is' and is subject to change or removal at any time.