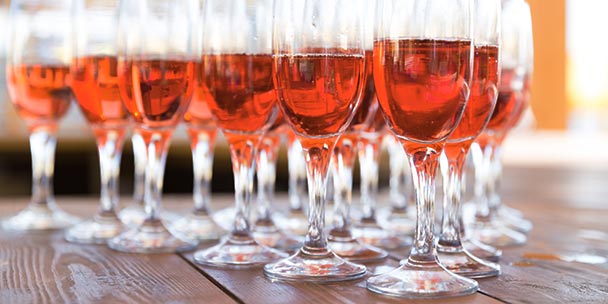 For decades it seemed as though rosé wine earned less respect than its red and white cousins, despite the fact that its popularity in the United States is well known. Rosé has a light, fruity taste that is low in tannins, which make it a terrific starting point for new wine drinkers. However, in recent years the global love for rosé has developed to such a degree that it is now more popular in France than white wine. Here’s a look at some interesting information about this versatile wine as well as a tasting guide to help you explore the options.

1. The History of Rosé

It’s widely known that the first wines created were rosés. This is because the technique used at the time to make wine–basically just squishing the juice out by hand or by foot–allowed a little red from the skins to enter the juice. Without the maceration of the juice with the skins, as we do today, the wine would not have been able to achieve a deep red color, but the contact with the skin did not allow the wine to be white, either.

Even as techniques developed over centuries to create a deeper red color in wine, people still preferred the pink option instead of the harsher tasting red wines. In the Middle Ages, a light pink “claret” was treasured as the finest wine available and the darker pink to red varieties were considered to be of poor quality.

The making of Champagne in France was instrumental in history of rosé as well. Most early Champagne was light pink in color or darker pink if the maker added elderberries to deepen the color. It wasn’t until decades later that Champagne makers developed a system for making white sparkling wines.

After World War II, the world of rosé changed as consumers started experimenting with sweeter, sparkling options for rosés instead of the traditional drier versions. In the 1970s, white zinfandel and blush wines started competing with rosés, and it was then that the reputation of the centuries-old wine began to suffer. Consumers tended to group the sweet blush wines and dry rosé wines together in their minds and thought rosés weren’t as fashionable as reds or white.

Fortunately, in the past two or so decades, the appreciation for dry rosés has been renewed.

There are three methods by which rosés are generally made:

3. Where Rosé is Made

France is the main producer of rosé wines, at about 28 percent. The Provencal region produces the majority of the rosés to come out of the country, but smaller operations can be found in the Loire Valley and the Rhone region. The United States and Italy are the next largest producers, and the U.S. is the second-largest consumer after France. In France, rosés have overtaken whites in the popularity category.

The versatility of rosés, paired with the growing appreciation for the pink drink among educated wine aficionados, has brought the classic dry or off-dry wine back into prominence. Rosé production in France increases every year, as does the number of bottles being imported into the U.S. or produced in California or even Texas. Its quick turnover time is another selling point–rosés are best if consumed within two years of bottling.

5. Rosés Have Lots of Flavor Profiles

The perfect tasting guide for rosés would suggest the sampling of all types of offerings. The general rule may be that the lighter the color, the drier the wine. Consumers should be sure to sample vintages from a range of varietals such as Pinot Noir, Malbec or Merlot grapes. The darker pink wines will likely be bursting with fruit flavors and have a higher tannin level thanks to the longer time the skins were allowed to remain in contact with the juice.

The range of colors usually found in rosés may include these labels:

The tasting notes generally associated with rosés include descriptors such as grapefruit, raspberry, strawberry or blackberry. Profiles like these make rosés ideal for spring, summer or any time a light, refreshing wine is desired.

If consumers follow the example of the massive rosé wine producing region of Provence, France, they will find that the most logical pairings will be with spicy Mediterranean foods common in that area such as garlic, hummus and seafood. Because rosé should be served chilled, it is suited to almost any foods from warm-weather areas. Turkey, quiche, eggs and tuna are other good pairings, as well as just about any type of Mexican, Thai or Greek cuisine.

Some people serve rosés in Champagne flutes, but they really should be poured in their own style of glass, depending on the age of the wine. For young, light rosés, a glass with a shallow bowl and a slightly flared lip is believed to place the wine right onto the correct part of the palate for maximum enjoyment. A tasting guide might indicate that slightly more aged rosés may be served in glasses ultimately designed for white wines because the function of rosés is similar to that of whites.

Rosé wines have followed a roller coaster of popularity for centuries to end up where they are today. Their versatility and refreshing, accessible flavor make them a popular choice that gains devotees each year. Perfect for summertime enjoyment and ideal with spicy foods, rosés should have a cherished spot in any consumer’s wine collection. By choosing to purchase rosés, every aficionado is helping boost the pink drink’s domination. How to Train Your Palate Tips to Choosing the Best Rosé Wine for Your Summer BBQ By Erin Doman
1 Comment
#list#rose#rosé wine#tasting guide
Tasting GuidesWine InfoWinemaking Tips
Certain content that appears on this site comes from Amazon Services LLC. This content is provided 'as is' and is subject to change or removal at any time.